When it comes to pogo stick design, the V4 is without question the most advanced pogo stick ever made. We took the traditional spring pogo stick and tossed it in the trash years ago. Since then, we've been creating pogo sticks that use our patented air spring instead of a metal spring. Springs are cool and all, but they can't be quickly adjusted to accommodate different weight riders, they're heavy, and they just don't have what it takes to jump high.

One of our favorite things about the V4 is that a 300 pound adult can use the exact same pogo stick as an 80 pound kid. Because the V4 uses air pressure, you can tune it to your exact preference in less than a minute by pumping it up to jump higher or taking air out to jump lower. Some people like to bounce 1-2 feet high and use the V4 for exercise, while others like to do flips off of rooftops.

The V4 uses an air spring to launch you into the air. When you're done using it, you can release the air pressure and deflate the spring. No tools or anything required. Just let the air out, and push the entire slide shaft into the stick for easy transportation and storage. The medium V4 Pro goes from 54" in height during bounce mode to 34" in travel mode. 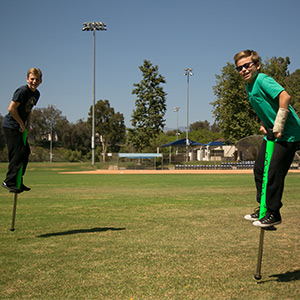 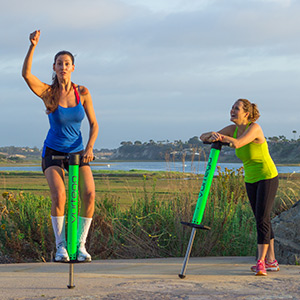 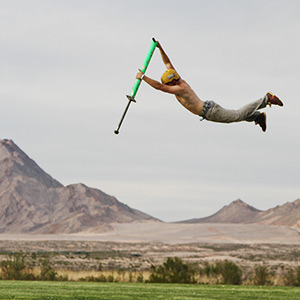 USE IT FOR FUN

Whether you're 10 or an old fart, the V4 will have you grinning from ear to ear. Pump it up to about 1/4 of your bodyweight for a fun, easy ride.


USE IT FOR EXERCISE

Hop on and before you know it your heart is pounding and the sweat is pouring. The V4 is one of the most fun full-body exercises around.


USE IT FOR SPORT

If you're into extreme sports, the V4 can handle anything you throw at it. Want to drop off a 15' ledge? Cool! But make sure to wear your safety gear.

The V4 is for anyone over 75 pounds. You’d think that our only customers are younguns’ between 12 amp; 20, but you’d be pretty surprised. A lot of our customers are actually full-grown adults in the mid-life crisis era of their lives who are trying to prove to themselves that they’re not that old. They say 60 is the new 40, right? :) Really, our V4 can easily be used by pretty much anyone over 75 pounds that can jump on a trampoline. The V4 is a bit more difficult than a trampoline because you'll need to use more core strength and balance, but once you get used to it, the feeling is very similar...except it goes wherever you want it to.

Describe your product in 3 words.

How did you come up with the idea for this product?

As children my best friend Josh Spencer and I both came from families who owned their own companies, so naturally we wanted to own our own business when we grew up. Added to that was our love for extreme sports...we grew up in Southern California, so our childhood included lots of stitches and broken bones for BMX, snowboarding, skateboarding, surfing, and dirt bikes. One summer night while hanging out, a friend was playing around on a toy pogo stick. Int he middle of one of his tricks, the thing exploded - pieces flying off in every direction. The friend turned to Josh and said, "Your dad owns a metal shop. Why don't you build one of these things that doesn't break?" The lightbulb went off, and the idea was born. We'd never imagined we'd own a business that would be a passion. Funny how things happen like that. Many thanks to Danny Serchio for the idea!

What makes your product special?

The love and care that we put into it. Obviously we have a one-of-a-kind, patented air-powered pogo stick that's capable of jumping up to 10' high while everyone else is stuck with springs or rubber bands. Because of that we're pretty much on our own level. But it goes a lot deeper than that. Have you ever used something that you loved but knew it could be done better? That's us! We just happen to also own the company. We love to bounce around on our pogo sticks, and we always want them to work better so that we can do more awesome stuff. Everyone else just happens to get the benefit from our selfishness!

What has been the best part of your startup experience?

Startups are hard. Don't ever let anyone tell you otherwise. It's hard in the beginning and it never seems to get easier. The bigger and faster you grow, the crazier and more difficult it gets. Lots of sleepless nights and frustrating moments, but you will learn more along the way than you could possibly imagine. We're experts in a lot of things we'd never dreamed of while growing up, and we have a pretty solid understanding of pretty much every aspect of business that you could imagine. You just can't put a price on the learning experience...but the absolute best part of our journey are the amazing people that we've met along the way. We can travel just about anywhere in the world these days and meet up with someone we know. How cool is that?

Price For Trade As Bengals Pick Up D-Tackle From Giants

The Bengals did what they don’t normally do Monday and pulled off a straight player-for-player trade when they dealt back-up center Billy Price to the Giants for back-up three technique B.J. Hill.

The Bengals acquired DT B.J. Hill from the N.Y. Giants, in exchange for C Billy Price. Hill (6-3, 311), a fourth-year player out of North Carolina State University, originally was a third-round pick of the Giants in 2018.

Bengals Get Plenty To Evaluate After Torrid Preseason Finale

The final moments of Sunday’s preseason finale at Paul Brown Stadium is just what you thought it would be. Not the result. Just the lineup. The Bengals lost a 12-point lead to the Dolphins in the final 5:57 with a batch of players who may or may not here after Tuesday’s final cut to 53.

Joe Burrow had the relaxed air of a guy who had just finished his last final exam of the semester. It’s not that he’s an unpleasant sort. Far from it. But he seemed looser than usual when he talked to the media following Sunday’s return to the field in front of 34,667 at Paul Brown Stadium.
news

Sunday's second half at Paul Brown Stadium, quarterbacked by Kyle Shurmur, saw the Bubble Bengals make one final case in the preseason finale with the final cut to 53 players set for Tuesday and the Dolphins stole a 29-26 victory on a fourth-and-15 Hail Mary from quarterback Reid Sinnett with 1:21 left.

Joe Burrow had his 90 seconds and a pair of rookies had their moments in the first half of Sunday's preseason finale at Paul Brown Stadium against the Dolphins. On the final play of the half Evan McPherson would have tied the club record with a 57-yard yard field goal if this thing had counted for Pro Football Reference in cutting the Dolphins' lead to 14-13. Long before that, after Burrow and his first offense exited after a three-and-out, running back Chris Evans entered stage right on the first play of the second quarter and tied the game at seven.

Joe Burrow got a rousing reception from the football-starved crowd that went through Paul Brown Stadium's fully opened gates for the first time in nearly two years and as expected he departed as quickly as he bounded on the field for Sunday's first series against the Dolphins.

Nick Cosgray, the Bengals rehab guru, had been having a pretty good training camp until the day before Sunday's preseason finale against the Dolphins at Paul Brown Stadium. Then he got a big surprise and suddenly became a game captain.

Zac Taylor: "We Got A Lot Of Really Good Work Out There"

Scotty Washington catches for a 9-yard Touchdown vs. Miami Dolphins

Jacques Patrick rushes for a 1-yard touchdown vs. Miami Dolphins

Trent Taylor with a spectacular catch for a 45-yard Gain vs. Miami Dolphins

Mike Thomas catches for a 32-yard Gain vs. Miami Dolphins

Joe Burrow: "I'm Excited To Get Out There And Have A Game Type Feel"

Zac Taylor: "It'll Be Good To Get Out There In Front Of The Home Crowd"

Zac Taylor: "This Will Be A Big Week For Us"

Zac Taylor: "I Thought The Defense Did A Nice Job"

Brandon Allen: "This Offense Will Be Very Explosive Once We Put It Together"

Brandon Allen burrows into the end zone for TD

Bengals, Hubbard collapse pocket around Fitzpatrick for the sack

Joe Burrow: "Back To My Old Self"

Lou Anarumo: "We've Ramped It Up Even More This Year"

Brian Callahan: "There Were A Lot Of Positive First Steps"

Zac Taylor: "I Was Encouraged By A Lot Of Things I Saw Out There"

View photos of new Bengals defensive tackle B.J. Hill. Hill was acquired in a trade from the New York Giants.

View some of the best action photos of the Ben-Gals Cheerleaders in action as the Bengals faced the Dolphins in the preseason on August 29, 2021.

Check out some of the top photos from the Week 3 preseason game as the Cincinnati Bengals faced the Miami Dolphins.

Putting in that work 💪

View photos of the Bengals players during their weekly workout at Paul Brown Stadium.

Stay up to date on the latest Bengals news and highlights with the Official Bengals App!

Check out these exciting offers and contests from the Bengals and our partners!

Bengals Booth Podcast: Let's Get It On

It's the "Let's Get It On" edition of the Bengals Booth Podcast as Cincinnati wraps up the preseason against Miami and turns its attention to games that count. With radio replays, postgame comments, and analysis from Dave Lapham.

It's the "Ready To Start" edition of the Bengals Booth Podcast as Joe Burrow returns to the lineup. Dan Hoard weighs in on that decision, have a "Fun Facts" conversation with cornerback Jalen Davis, and discuss the team with NFL Network analyst Brian Baldinger.

facebook Bengals
instagram Bengals
twitter Bengals
youtube Bengals
tiktok Bengals TikTok
email Sign Up
Have Questions? Chat with us now!
Advertising
The browser you are using is no longer supported on this site. It is highly recommended that you use the latest versions of a supported browser in order to receive an optimal viewing experience. The following browsers are supported: Chrome, Edge (v80 and later), Firefox and Safari.